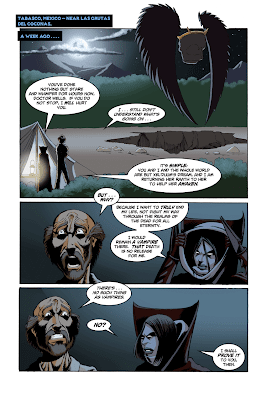 And the accompanying Author's Notes--stripped of links, since they're all links that are on Wevolt as well:

It's our friend, Dr Wells! This is the last we'll be seeing of the good doctor for awhile--his part of this story is nearly done for now.

I hope that this dialogue helps out those of you who feel like you're missing some plot points. If you have questions, leave me a comment!

I skimped a bit in that top panel, but I originally was going to color it a different way. That way turned out way too dark so I did a hasty and last-minute repaint up there, and it still isn't right.

I'm busy right now. Soooo busy. I'm writing three comics for you guys at this point! And I realize this is the first you've heard of this, so let me explain:

I'm working on a crossover with James Riot and Barry Linck, both of whom have awesome comics of their own. The Path and Phineus: Magician for Hire are both on Wevolt, and they're a lot of fun to read.

This crossover is called Wevolt Trinity, or just "Trinity" to its friends. It will have Locus, Phineus Beam and Chance McGavin flying down to Antarctica to visit the Mountains of Madness. Now, I've already shown you the Mountains of Madness in Locus--that's where Isaac was just recently. So the Trinity comic is definitely a canonical Locus story. Trinity, in fact, takes place before Locus Issue 1. She will look a little different and act a little different. Oh, and Spook will be there.

That's the second comic I'm doing. It will update daily for awhile. We're fiddling with a new format that makes it easier to update more often. If you guys like the look of Trinity, let me know and I'll do Locus the same way. I'll even update it 5 days a week--I can do it at that format.

So go check out that comic and let me know what you think of it.

I grew up on spaghetti westerns and old issues of Jonah Hex, Weird War and EC reprints. This comic will have a little of all of those things in it.

I'm making it as an incentive to join the fan club I haven't set up yet. So you might not see it for awhile, but I'm working on it.

And finally, my friend Murch has decided to make his own Wevolt site, and will be publishing prose there. So you guys go give Murch Writes a look and keep your eye on him. He's writing a while novel over there!
Posted by Adam Black at 10:25 AM