Now it's 2013, and I've got a lot of comic stories to get out of my head. First, of course, is Silk & Honey, which is playing right now. Then there's Trinity, a three-way crossover with Barry Linck and James Riot that's been pushed to the back burner more than once. And, of course, Slip, which is the comic about Spook's daughter. First issue's written, but I'm still fiddling with issue 2.

Today's post is about math, or more specifically, numbers. Because numbers define the universe and everything in it. Everything has a numerical value, and most of us have quite a few. From mundane things like age, height and weight to the more fundamental values such as mass, volume and velocity, we are all defined by numbers.

Numbers in themselves are interesting things. Almost magical. Take repeating numbers, for instance.

I can't explain it as well as you can experience it, so let's experience one of the universe's coolest number, pi.

Pi is 3.14159blahblahblahforever. Seriously. The decimal portion of pi goes on into infinity. In this infinite string of numbers, there are digits that repeat themselves. One repeats itself almost right away, but you can find larger strings of numbers. If you click here, you can search pi for a sequence of numbers. Your birthday is in there, as a matter of fact! Seriously. Type it in. Doesn't even matter what format you use.

That site will only show you the first time the sequence appears, but if you download a text document with the first four million digits, you will find your birthday repeated over and over again. I found mine five times in that document.

What's the point of all this? First off, it's to have fun with numbers, but there's also a storytelling angle to this.

Imagine the universe is a wavelength. Imagine all the atoms and all the orbiting (and free) bodies form one big overall wavelength. This could be a wavelength of sound or energy or marshmallows...doesn't matter. It's a pattern of numbers, essentially.

That wavelength/pattern of numbers will inevitably have spots where it repeats itself. Earth and our solar system have their own wavelength (in this theoretical universal model), and somewhere OUT THERE IN SPACE, that wavelength repeats itself: another Earth is out there somewhere. And, seeing as how the universe is infinite, there are an infinite number of Earths out there.

This also applies to the Realms of the Dead in the Locus Universe. If you've seen the map, you will know that the Worlds of the Living and the Realms of the Dead are all joined together in a three-pronged fractal pattern. Each "world" is a dimension, and each of them is habitable to human life. Essentially, they're spots where the "humans can live here" pattern of the Universal Wavelength repeats itself.

Is any of this true? or real? or even provable? Yes and no. There are scientists who are pursuing similar ideas, and they're a lot better at this sort of thing than I am. I'm just taking a behavior which all numbers possess and applying that behavior to an imaginary unit of measure: The Universal Wavelength which exists in the Locus Universe.

In short: Math is fun. Get better at it! You'll be glad you did.

Thanks for reading! I may or may not do more math-related posts. It all depends on time this year. Also: check out the cover to the first issue of Slip! 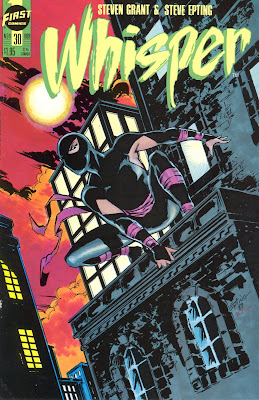 Whisper was written by Steven Grant, and this cover was done by Steve Epting. If you've never heard of Whisper, check it out! Whisper was a big inspiration for Locus.