So, I was digging through the stacks and bins and boxes of old art in my studio this weekend, in order to find some old Locus art, and I stumbled upon some old Tal art instead.

Well, technically, it's Midnight Realm art, but you get the idea.

I honestly don't remember why I didn't send this off to ShootingIron. It might've been because Rich Wallace was doing the Zoab, and had already done up versions of his own. Who can say anymore? It was six years ago, and I have trouble remembering last month. 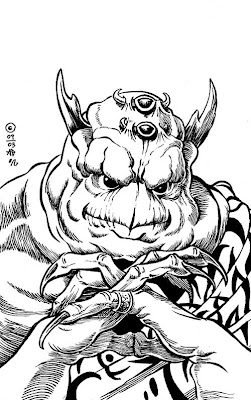 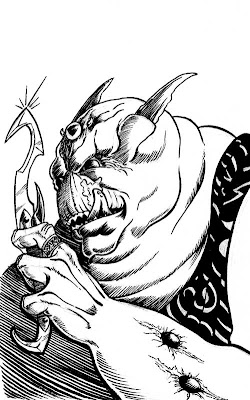 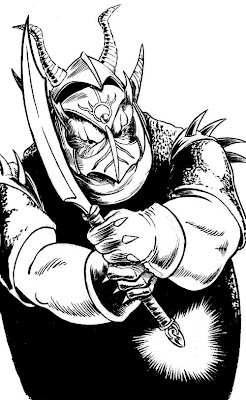 Jeez, what a year last year, eh? I think everyone had a lousy time in one way or another. My wife's a pesonal banker, and I got to hear all sorts of horror stories about her clients. All my comic-makin' friends went through hell, too. What a mess 2008 turned out to be.

2009 is already shaping up to be a better year, though. I'll be finally getting to work on the graphic novelization of A Prophecy Forgotten, which will be fun. One or two other secret projects should be seeing the light of day this year as well. I also quit one of my projects--the graphic novelization for Yesterday Was A Lie. It just wasn't a good fit. I bowed out so they could find themselves a better artist. ;)

And then, of course, there's Locus, the personal project I've been dying to re-start since 2001 or so. It's already up to issue two, and the response has been great so far! Much better than I expected for a webcomic that only updates 3 days a week with the tagline "Boobs, Blood and Bad Language".

I'll be getting a print version ready in the next couple of weeks, as well as some merchandise like mini-posters, t-shirts...stuff like that.

As for conventions, I don't think I'll be spending much time at cons this year, but we'll see. I'll be back home for the Fourth of July (as always), and up in Halifax for another Kiss convention--although I'm going back more to show my wife how great Halifax is, as well as introduce her to all the new friends I made up there. I love Halifax. I wouldn't mind moving up there and living out the rest of my days.

I'm also considering hitting WW Texas this fall. My bud Mr Riot offered to let me crash at his hotel room, and he's such a crazy fun dude that it's gonna be hard to resist. But we'll see. Money and all that. You know how it is.

At any rate: big things are coming this year! I know everyone says that in their blogs around this time of the year, but it's true. I have a lot of weird and cool things in the pipe--videos, a live model dressed up as Locus...big things.

I'll be building them up slowly and carefully, though. Slow and steady and all that.

Now I gotta get back to work.
Posted by Adam Black at 1:19 PM No comments: