The Holy Crusade against the female breast

I was raised by very conservative parents who happened to have a very European attitude towards nudity. I know that makes no sense, but such was my childhood. None of it made any godamned sense. I'll bet yours really didn't, either. Be honest.

Anyway, I was taught that a woman's breast was just another body part, and not something to be ashamed or afraid of. The same for genitals and everything else which can be summed up as "human anatomy". Now, this doesn't mean we all ran around the house buck-naked all day. But when one of us would accidentally walk into the bathroom to use the toilet, and catch Mom just coming out of the shower, there was no freaking out or shouting or religious penance or anything like that. It was just, "oops! Sorry, Mom!" and the door got shut and we stood outside the bathroom door doing the pee-pee dance till she was all done in there.

However, I live in a country run by and populated primarily with childish retards. To prove it, all I have to say to you are two words: "Wardrobe Malfunction".

This is why I can't post my artwork on Myspace or Facebook, for example. Facebook has even gone so far as to ban photos of breastfeeding.

This is the point where the usual blogger calmly explains the error in this decision. I'm not even gonna bother. It's like trying to explain to someone that you shouldn't drive 80-penny nails through your nutsack or run over little children in the school zone.

Christ.
Posted by Adam Black at 4:28 PM No comments:

Okay, so maybe I'll use this site some more

My website skills aren't what they should be. As such, my website never really gets updated. It occurred to me the other day that I should just slap a link on the site to lead you here, and just update this thing instead. Of course, I'm doing all this the week of Christmas, which means I won't really be doing all this till next week or the week after. Such is the way of things when you're me.

I have way too many sites to keep track of and keep updated. Way too many. Here's a partial list:

Myspace, Facebook, LinkedIn, ComicSpace, the Locus Forums, the Yirmumah Forums, the KissFanSite Forums, the Secret Identity Podcast forums, my deviantArt page, and probably about ten others I'm forgetting at the moment. Why do I do this to myself? Who knows.

At any rate, I think this is going to be my main page for awhile. Just long enough to see how it works out. I'll start by posting a picture: 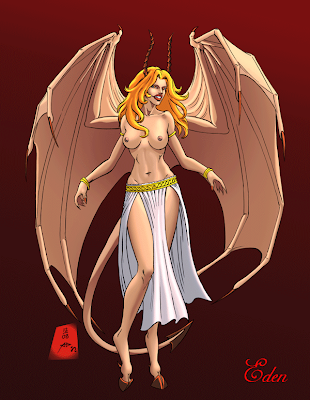 That's right! This blog is gonna be full of monster girls with their boobs hangin' out. So don't read it from work.

I'm in need of assistance. I have a number of weird little promotional projects for Locus that I'm trying to get done, but just don't have the time to learn to do. One of these projects is to make a fake movie trailer featuring art from the comic, set (in time) to music. If you know how to do something like that, let me know!

And, if you haven't read Locus, why the hell not? It's full of Boobs, Blood and Bad Language. Hell, she fights a trio of werewolves wearing nothing but jeans, boots and a pair of sunglasses. And just wait till we get full-swing into issue two! Locus' boobs aren't the only boobs we'll be seeing.
Posted by Adam Black at 12:14 PM No comments: